Revolutionary Solidarity with the female fighters in Kurdistan

Female fighters and the liberation of women

With the official launch of the female fighting units YPJ (Women’s Protection Units) in April 2013 in Rojava, the struggle for women’s liberation from patriarchy entered a new phase. The women of the YPJ played a major role in the armed struggle against Daesh and they were key to the resistance against the Turkish State’s invasion of the area. The Turkish incursion was an attack on the gender-equal and multi-ethnic project of Democratic Confederalism in Rojava, which poses a threat to Erdogan’s patriarchal, Islamist and authoritarian politics.

The women from the different fighting units do not only fight against external threats; they also transform women’s positions within their own society, standing as heroic examples of strength and courage and as defenders of a gender-equal society.

Internationalist solidarity with a women’s revolution

International Red Help has come together with comrades from different organisations across Europe and Kurdistan. As internationalists from different political currents we want to show our solidarity with the struggle of the female fighting units by giving them material support. The main purpose of this campaign is to send medical supplies to the region: we collect money to buy Celox bandages and ensure they reach the right fighting units. A former Celox-campaign which sent bandages to the internationalist fighters in Rojava proved very useful in the field. Celox bandages help to stop critical bleeding and can save lives.

Material support is crucial, but we also want to raise awareness about the revolution in progress. This is why we share information about the different initiatives taking place in Rojava and Shengal : women’s houses and councils, parity in political institutions, Jinwar village and declarations of international solidarity. We believe we can learn from their experience, courage and strength.

In the beginning of our campaign, we focused on the Yazidi fighting units from the Shengal mountains. Indeed, the atrocities committed by Daesh hit the Yazidi population living in Shengal (Kurdish Iraq) particularly hard. In August 2014, Daesh attacked the Yazidi people; thousands ran away and those captured were either slaughtered or enslaved, especially women. 30,000 Yazidis fled to the Shengal mountain and were held under siege by Daesh. Whilst the world watched passively, different Kurdish fighting units came from across Kurdistan to rescue the Yazidi people. With the help of the YPJ, the Yezidi women followed in the footsteps of their sisters in Rojava and formed their own women’s battalions, the YJS (Shengal Women’s Units). In 2017, the Shengali women units together with the YPJ were at the forefront of the final offensive on Raqqa, which marked the end of the caliphate. While the initial aim of the campaign was to support the Yazidi female units in Shengal, after the Turkish invasion of Afrin, which posed a direct threat to the women of the revolution, it broadened to include all female fighting units in Kurdistan.

The war in the region is not over. The caliphate of Daesh has been defeated but isolated cells still exist. In 2018, the region was repeatedly attacked by the Turkish regime. At the beginning of the year, after a two-month offensive, Turkey took control of Afrin, reversing the gains of the revolution in the area and making thousands homeless. The Shengal region, Qandil mountains, the Democratic Federation of Northern Syria (DFNS) have been attacked by the Turkish regime with the support of Islamist armed groups or with the approval of regional governments. And in late 2018 Erdogan announced his plans to attack the DFNS with the withdrawal of the US-soldiers. Currently it is unclear when the USA will leave Rojava and whether other imperialist countries will take their place. However, further attacks by the Turkish army or their proxies are likely. If this happens, all help will be needed to support the revolution!

Let’s support the women’s military units politically and materially by funding “Celox”, hemostatic dressings. 60% of those wounded by gunshots die from blood loss while waiting for care. Celox dressings stop the bleeding quickly and effectively and therefore save lives. One bandage costs 75€. The Celox bandages are distributed to the fighters at the front line through competent medical units.

For the liberation of women!

Revolutionary Solidarity with the female fighters in Kurdistan ! 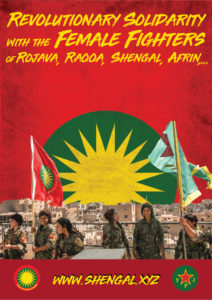 * The situation in Rojava / Democratic Federation of Northern Syria and Shengal / Sinjar is highly complex and borders are constantly changing. To follow up on the regions geopolitical situation and to get an idea of where the places that are mentioned in this text are located, we recommend to follow “liveumap“, an opendata-driven media platform that maps up to date information in the region.