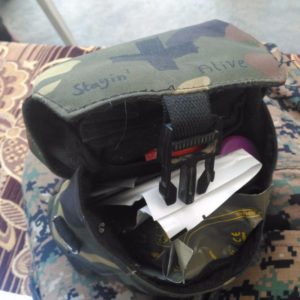 Here you can see an image of my IFAK (Individual First Aid Kit) which I carried with me at all times as a volunteer in the International Freedom Battalion in the Raqqa liberation operation in 2017. In the IFAK is a CELOX bandage I received from the International Red Help in their last campaign to send CELOX bandages to Rojava, our tabur (unit) alongside other international takims (teams) and local taburs received the CELOX bandages. The CELOX bandage is an essential piece of battlefield medical equipment, used by packing a serious injury to stop bleeding, the haemostatic agent within CELOX acts to clog the wound. Alongside a tourniquet CELOX is one of the most effective ways of quickly stopping heavy bleeding, one of the biggest causes of death in the war in Northern Syria. During the operation in Raqqa members of our tabur used medical equipment including the CELOX bandages to help injured comrades, members of local SDF units and Deash POWs. Lives were saved which may not have been without the support from international comrades in the Red Help and everyone who supported the campaign. Turkey has invaded Rojava, the base of the revolution in Northern Syria and a hope for the freedom of the whole Middle East. If and when Turkey and its fascist gangs attack Shengal, the CELOX bandages funded by this campaign will save the lives of our comrades fighting to defend the revolution. This demonstration of international solidarity is bigger than just the practical revolutionary and military gains however, it shows the strength of the global proletariat and how communists and workers the world over will stand together against fascism and for the freedom of all oppressed peoples.

Long Live the International Struggle Of Workers And Peasants!

“Every society has a history, and these histories are full of heroes and pioneers… What has been developed with the pioneer role of women like Besê, Sara and Zarîfe… who have sacrificed themselves, their bodies Read more…

A week in Kurdistan

On Monday, 23rd May, Recep Tayyip Erdoğan announced a future major military operation against Rojava. Plans for a cross-border invasion were endorsed on Thursday, 26 May by the Turkish Security Council, composed of civilian and military leaders. This future operation plan to invade within 30 km beyond the southern Read more…

Here is the statement shared by YPJ International about the situation in Rojava (North and East Syria), Bakûr (Northern Kurdistan – East of Turkey) and Başur (Southern Kurdistan – Northern Iraq).