A press release by the YPJ Afrin General Command 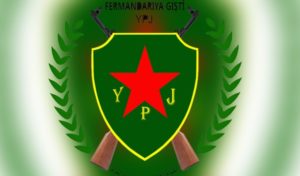 The history of every people has values ​​that the people base themselves on. The history of our people also has written values ​​to be written in gold letters. The Resistance of our Era has reached the 44th day. Undoubtedly, this resistance which is displayed in Afrin is the inheritance of the Kobani resistance. And today this resistance is being carried out on the Qurmenc mountain of Afrin. Many of our daughters and our sons have become aware of the reality of their beautiful life and have put themselves to the forefront against the genocidal Turkish state, al-Nusra, al-Qaeda and Daesh gangs, to fight until prosperous their very last breath for their sacred lands and to live this truth. There are the days of inhumane attacks in Afrin. These attacks are also aimed at the destruction of a people. Especially, the fascist Turkish state is in efforts to maintain its Ottoman campaigns. Like their descendants, they also want to plunder the lands of the people and nations. This is a very clear and open reality in Afrin today.

With the spirit of Arin Mirkan and Avesta Xabur, the Afrin resistance will continue as long as there are attacks. History is written in Afrin with the resistance woman’s spirit and woman’s hand. The Kurdish woman or the YPJ army has become the most fearful dream of fascism. The Qurmenc mountain in Afrin has been the continuation of Mıştenur in Kobani. Just as how Arin Mirkan destroyed the gangs and gave hope for the hearts that struck for freedom, with the same thought and ideology, our comrade Avesta Xabur, with great courage, frustrated the attacks of the Turkish state and made the Qurmenc mountain more beautiful with her resistance spirit.

The fascist Turkish state and gangs are bombarding Afrin lands with all kinds of heavy weapon techniques that exist in warplanes, tanks, howitzers, Katyusha rockets, mortars and all that they have in their hands. Despite these inhumane practices, YPJ and YPG fighters are displaying a great resistance spirit with the beauty of the historical resistance. Until now, if the technique on Afrin had been used on any state for even 44 hours and not 44 days, it could have not stood against that technique. As we have seen in the spirit of resistance displayed, it has once again been shown that the will of ours and our people is greater than any other. We will certainly not give way to the Turkish state nor their gangs in any way as long as we exist. In the face of these attacks aiming to exploit our land, our struggle type full of trust and love for the growth of our struggle, has frustrated the dirty plans of the hegemon powers and will continue to do so. Everyone who enters into dirty plans on Afrin should know that freedom fighters in Afrin are also the followers of Arins, Gelhats, Revans, Destinas and Barins. Therefore their dirty plans will not be fulfilled.

We greet our people as the YPJ Afrin General Command, we also greet the popular fighters of women’s units from Shengal, Jazira, Kobani, Raqqa, Tabqa, Deir ez-Zor, Aleppo and South Kurdistan. At the same time, the women and the mothers in Afrin have undoubtedly stood behind their fighters for days and have not neglected to offer any kind of support. We also greet our people in Afrin with our loving greetings. And once again as YPJ we say that we will continue to struggle until the last drop of our blood. It is once again revealed how unequal the world we live in is. Because the attacks on Afrin are seen by everyone, but it is clear that everybody who sees are ignorant to it. This makes it clear that the justice written on white pages is invalid. If it were true, the slaughter of women, children and the elderly would not be ignored. We are also sure of our self-defense power, and we will never base ourselves on different powers in any way. We have no expectations from anyone and we never will. However, everyone should know that the slaughter of the peoples are carried out in Afrin. Those who call themselves the defenders of the peoples should fulfil their duties.

Once again as the YPJ Afrin general command; We declare that our fight will continue until the dreams of our martyrs are fulfilled. It is our main duty to reach the flag of our martyrs to the skies. We will do all that is necessary to protect the values ​​of the people and our people. And finally, we say that the success of our Libertarian people will be the Rescuers of all humanity.

Link to the press release

“Every society has a history, and these histories are full of heroes and pioneers… What has been developed with the pioneer role of women like Besê, Sara and Zarîfe… who have sacrificed themselves, their bodies Read more…

A week in Kurdistan

On Monday, 23rd May, Recep Tayyip Erdoğan announced a future major military operation against Rojava. Plans for a cross-border invasion were endorsed on Thursday, 26 May by the Turkish Security Council, composed of civilian and military leaders. This future operation plan to invade within 30 km beyond the southern Read more…

Here is the statement shared by YPJ International about the situation in Rojava (North and East Syria), Bakûr (Northern Kurdistan – East of Turkey) and Başur (Southern Kurdistan – Northern Iraq).