Women from Kobane form a battalion to support Afrin 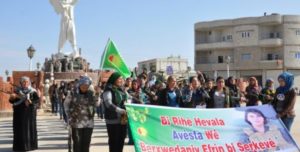 Members of the Kurdish Women’s Movement of Rojava (Kongreya Star) formed a women battalion to support the resistance in Afrin. The battalion was named after Kurdish women fighter Avesta Xabur (Zuluh Hemo), who carried out an action of self-sacrifice against Turkish soldiers in Afrin on January 27.

A new movie is out about YJŞ fighter Hêza. When ISIS committed its atrocities of genocide and enslavement of the Yazidi people in 2014, Hêza was one of the women captured. She managed to escape Read more…

[EN] New Celox bandages have arrived in Manbic in North and East Syria. Even tough the war on Rojava has disappeared from the headlines, the Turkish fascist state continues its attacks relentlessly. From the occupied Read more…

The Celox campaign was launched in the summer of 2015, following the battle of Kobané and the formation of the International Liberation Battalion. While money was quickly raised and first batches of CELOX were purchased, Read more…